Speaking on a  television programme in Port Harcourt, Rivers State, Wike said Umahi’s his quest to become President of Nigeria, which, according to him, made the Governor to join APC may destroy the South East politically.

Governor Wike, said while no one will deny Umahi the right to pursue his political aspiration, he should be mindful of the political future of the  South-Eastern region.

He also claimed that Umahi was ‘ungrateful man’ for insisting that he left PDP to protest the injustice the party meted to the South-Eastern region since 1999.

In a press Statement by Governor Wike’s media side, Kelvin Ebiri quotes Wike saying that one reason why  Gov. Umahi is unhappy with PDP, was because Peter Obi, was chosen to run the joint Presidential ticket with Alhaji Atiku Abubakar in 2019.

“When we had the 2018 convention that produced our Presidential Candidate then, the Waziri of Adamawa, Alhaji Atiku Abubakar, as  Presidential candidate, he consulted widely, and came up with Peter Obi, to be his Vice, Umahi was livid because he wanted to produce or he wanted to be Vice President. You don’t chose who would be the Vice Presidential candidate of anybody. Umahi was livid. What disturbs me, why do you think that if anything comes to South-East it must be you. Why do you think so?”

Governor Wike pointed out that Umahi cannot talk of injustice when he practices injustice against the South East zone by installing  his two younger brothers; one as the Zonal Vice Chairman of PDP and the other as the Deputy State Chairman of the party.

“If he believes in equity and justice,  will he be doing such? It is because he has planted these people that the State House of Assembly had such effrontery to give the National Working Committee (NWC) ultimatum to zone presidency to the East. Where does such thing happen? No other party has done any zoning. You can imagine the level of selfishness.”

He also described as untrue the claim by Umahi that he made PDP what it is in the South East zone as the only financier of all of its activities. Such claim, according to Governor Wike suggests that other Governors of Anambra,  Abia,  and Enugu States are not anything to ensure the success of the party in the zone.

“I know it’s not correct. If not for Pius Ayim that impressed it on former Governor Elechi, would Umahi have become governor? So,  he can’t say he’s the one who has built PDP.

“The party made him what he is and if he denies it,  it only tells you the kind of person he is. What’s even his contribution at the national level of the party to support his claim.  Where was he when people like Alex Ekwueme fought General Abacha and built the party. I distaste such arrogance”,  he asserted.

Governor Wike, dismissed the allegation against him by Umahi that he is a dictator who imposed, Uche Secondus as  PDP National Chairman and his will on the party. He described the allegation as  spurious as evidence abound that Secondus was elected at the National Convention of the PDP.

The governor accused his Ebonyi State counterpart of being treacherous. To buttress this, he stated that when the caucus of the party decided that Kingsley Chinda, should be elected Minority Leader of the House of Representatives,   Umahi told his State Reps to work against it.

Governor Wike further stated that when PDP committed members tried to rescue the party from  the destructive tendencies of Senator Ali Modu Sheriff, Umahi was one of those who was frolicking with him.

“We fought and won and Ali Modu Sheriff left.  I can say that I am one of those who made sure that PDP never died.  I feel comfortable with my performance in my State. Rivers people are comfortable with me too”.

Governor Wike disclosed that all PDP governors and committed members of the party have never been obvious of the fact that Umahi had been an APC mole in the PDP.

According to him, the Ebonyi governor’s claim that the South East is marginalised in PDP, was diversionary.

“Three Senators from his state said they have seen the need for South-East to produce president. However, it is not the way our governor is going about. This is not a personal thing. Your ambition should not destroy the entire South East.” 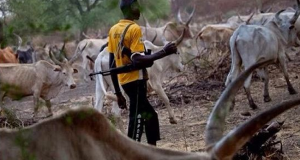 We need prayers to save Nigeria, says Sanwo-Olu

Lagos State Governor, Babajide Sanwo-Olu has called on clerics to pray for Nigeria as the nation is seriously shaking.