The immediate past Governor of the State, Dr. Emmanuel Uduaghan, has formally defected from the All Progressives Congress (APC) to the Peoples Democratic Party (PDP).
Uduaghan re-joined the PDP at his Unit 1, Ward 6, at Abigborodo, his country home, and was accompanied to the venue by thousands of his supporters amid cheering solidarity songs on Monday.
“I am back to join forces with other party greats to strengthen our party, the largest party in Africa -PDP!,” the ex-governor had earlier stated on his Twitter handle.
The return to PDP is coming barely one year after he took a critical decision to join APC on 29 August,  2019, in protest of his alleged maltreatment in PDP.
Uduaghan, who was Delta State Governor for eight years in the build-up to the 2019 elections defected to the APC where he contested and lost the Delta South Senatorial seat in 2019 to incumbent Senator James Manager.
There have been insinuations that the former governor is planning a comeback to the PDP in a bid to boost his chances in 2023 as PDP now fully controlled the South-South region.
Uduaghan met with Governor Ifeanyi Okoya two weeks ago to fine-tune plans to return to PDP, his former base.
He also met with James Ibori, who was also a former governor in Delta State.
Uduaghan was the Governor of Delta State on PDP platform for eight years (2007-2015).
He had earlier served as the State’s Commissioner for Health and later Secretary to the State Government under the administration of Ibori.
2020-09-28
admin
Previous: Tough operating conditions present challenges for sub-Saharan reinsurance markets – Best’s Market Segment Report
Next: 36 states drag FG to Supreme Court over courts’ funding 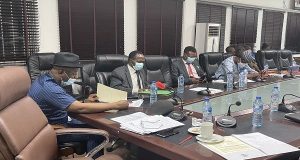 The Nigerian Immigration Service (NIS) has beefed up security at the nation’s borders in a bid to arrest the inmates and suspects who escaped from the Imo jailbreak as they may be planning to flee the country.