Following news that has gone viral in recent time that the leader of the Indigenous People of Biafra (IPOB), Nnamdi Kanu would return home for his mother’s burial, Abia State Commissioner of police, Ene Okon in this interview in Umuahia has warned that the police in the state would not spare Kanu if he set foot in Abia for his mother’s burial.

This, Okon said was because the IPOB leader was declared wanted.

The CP equally warned that police would not hesitate to arrest any IPOB member who may want to identify himself as belonging to the pro Biafra group during the burial.

IPOB said their leader, Nnamdi Kanu will be coming home for his mother’s burial. What do we expect from the police?

Well, if members of IPOB are speculating that, the police do not know that one. What I know is that Nnmadi Kanu jumped bail and escaped and is wanted and remains a wanted man. Until that time, but I couldn’t tell you about police action on anything that is speculation, until he comes.

The mother is dead and from every tendency he is likely coming back to bury her. What will be police reaction if he comes back?

If he comes back and fails to submit himself as you will want him to, what will police do?

If he submits himself, we have to take him before the court, but where if he fails to submit himself to the police if he comes back, he is a wanted man; he is a wanted man and the law on somebody that is wanted is clear. Even you as a private person or civilian can arrest a wanted man and hand him over to the police. Then what will police do? If someone is wanted and police sees that person, definitely he will be arrested by the police and handed over to the court.

Nnamdi Kanu has said without number that he has not done anything that would warrant the court to declare him wanted. Do you agree with him?

Did he jump bail or not? He had a case in court, he was granted bail, and he jumped bail. So, when somebody jumps bail, what do you call that one?  If he claims he did not do anything, he that will be an  illusion, living in the inclination of the grandeur. The fact remains that he jumped bail and escaped; and he is wanted, he is wanted. So, that is the position.

There is this thinking in some quarters that since the mother died, police would have  sympathy and allow him to come  home and bury her.

Don’t you think along that line?

The court will decide and not the police. But the fact remains that once any person is declared wanted, wherever the police see him in any corner of Nigeria, the person will be arrested.

Since you said the IPOB leader will be arrested if he comes home because he was declared wanted, he has been moving freely abroad, why have the police not made any effort to nab him?

That has to do with international law and a lot of things are involved that require  going through Interpol.

Some people believe Nigeria police is acting as local lords in this matter. Why has it not initiated that move for Interpol to get the IPOB leader arrested?

That’s a question I cannot answer, there is international dimension to it. The Federal Government has to come in here. You know Nigeria is a member of Interpol, a member of international organizations that have treaties; it has to go through these treaties, conventions and all that. You can’t just jump over some of these things and you say you want to arrest somebody, no, there are procedures. We are in a country that has treaties with other countries, we need a whole lot of laws and all that and you have to go through all those procedures, it’s not a day’s job.

Members of IPOB see Nnamdi Kanu’s mother as equally their mother and customarily may be preparing to come out en masse to give her a befitting burial. What will the police do if this happens?

Until that time, wait and see what police will do.

Are there security measures to be put in place by the police during the burial ceremony?

As at now you are just saying what people are speculating, we have not known or heard that the family has fixed the burial and all that.

Won’t it be wise for police to give warning early enough to those who may want to foment trouble in whatever guise during the burial?

If IPOB applies to the police to be allowed to formally take part in the burial, what will be your response as the Commissioner?

Who will apply to the police?

A proscribed organization to do what? A terrorist organization will apply to the police? Okay, when they apply, let them put their names, their correct names so that we know what to do. By the way, how do you expect police to honour application by a proscribed and terrorist organization? We are even looking for them, let them apply and put the names of their leaders in the application as that will give us a very good ground to do the needful. – Culled from The Sun.

IPPIS: ASUU threatens `No Pay, No Work’ over govt plan to stop salaries 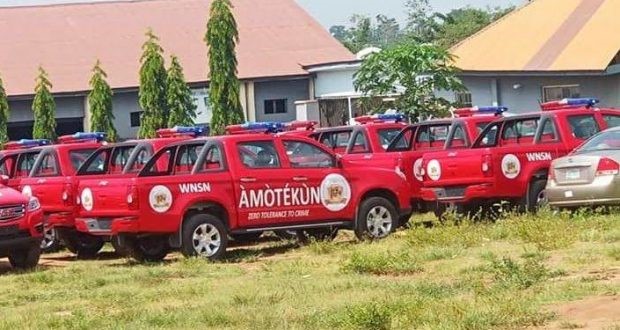 Governor Rotimi Akeredolu says Southwest governors are ready to meet with President Muhammadu Buhari to explain the whole concept of the security outfit, Amotekun, and why it is urgently needed ...