@2022 - All Right Reserved. Designed and Developed by PenciDesign

North thinks restructuring is all about resource control – Ezeife 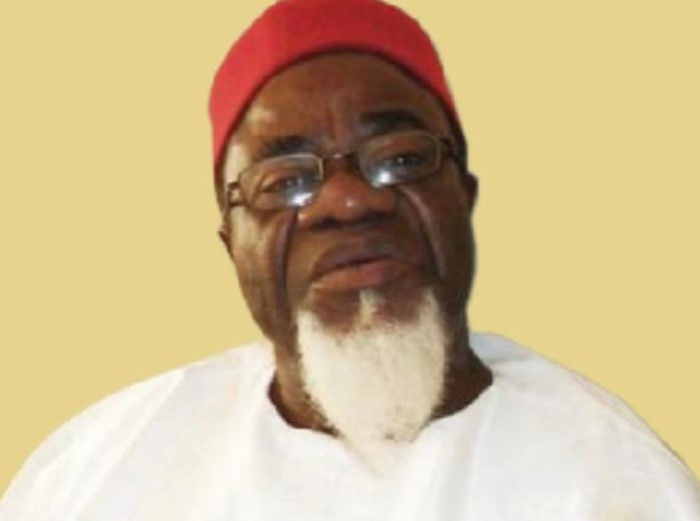 He speaks about the call for an Igbo presidency and why the Labour Party’s presidential candidate, Peter Obi, is the best choice for 2023.

You are a stakeholder in the Nigerian project and have been a vocal advocate for one Nigeria; as the 2023 elections approach, do you have any fears, given what is going on in the country?

Nigeria is developing into a superpower, as if God destined it for unmatched greatness. Which group in Nigeria will be against reasonable peace? Is it my own group? We have voted with our feet for one Nigeria, and in spite of what the government has been doing to us—excluding us, marginalising us, etc.—many of us, especially the older ones, are still talking about one Nigeria. We know that one Nigeria, properly restructured, will be best for Fulani.

Let me take the case of the Fulani as an example. How many are they? They are too many. If war comes to Nigeria and it is against them, how will they prevent being killed off by other Nigerians? We need the Fulani more than they need us—like their strategic thinking. And we want them to be permanent residents of Nigeria, and this idea of taking them as people who came from Mali is not right; we want them integrated into Nigeria, but not on the basis of being “born to rule.” This is the problem.

Yoruba is talking about leaving, but Yoruba gain more from one Nigeria restructured to work, and any group, as I see it properly considering their own interests in the long term, would find one Nigeria the best for that group.

So we are appealing to all of us to think deeply about our interests, and let’s have a new Nigeria come in that enables us to raise the dignity and respect of all blacks on Earth and that enables us to have a say in the governance of the world. Look what’s happening. Russia is killing off people in Ukraine.

Many people don’t understand that God created blacks as equals to whites. And when we announce our presence in the comity of nations, we will be able to influence what happens at the United Nations and bring better peace and consideration for the welfare of men to the world.

He is the true unifier in Nigeria because he is someone who will banish poverty, insecurity, and all the negatives associated with Nigeria. That person is Peter Obi, and he is the person whom all of us will support.

If you look at the records, you’ll find out that the elders in Abuja really worked hard to get him out as a candidate. We forced him to get out of the Peoples Democratic Party so that he could be a candidate for president. So the question of even adopting him doesn’t arise, as he is our trusted, God-anointed candidate to remake and recreate Nigeria. He will make everybody happy.

Despite this, it appears that no prominent Igbo politician from either of the two major political parties, the All Progressives Congress or the PDP, has come out in support of Peter Obi. Why is this so?

They are not shy about coming out, but, as you know, there are problems. Some people, especially in the North, don’t understand us, the Igbo.

Some of the politicians are planting ideas in the minds of village people that the Igbo has something wrong with them. So if you don’t find the Igbo who are ministers, senators, House of Representatives members, and so on, saying Peter Obi is their man, it is because they don’t want the rest of Nigeria, to consider Peter Obi an Igbo project. We don’t want the rest of the nation to think that Obi is the only Igbo candidate and Igbo alone. That is not it; but if you want us to say it soon, we will.

We will say that our candidate is Peter Obi, and anybody who knows anything, should join in prayers to God because the hand of God is on Peter Obi. The hands of God are on the Nigerian youths who are teaching us how to make Nigeria a new country.

Some political pundits have contended that yes, the youths are for Obi, but along the northern political hemisphere, Obi is not on the ground. Do you think so or otherwise?

Where we are, this is my place of receiving people. I have received Northern Youths. Likewise, I have received youths from the West and from all over the country.  Some of them have also conferred honour on me while telling me that they support Obi.

So, I don’t think there’s any defect in the movement. People, old and young, Christians and Muslims, and so on, have understood where we are and where we are going, which is where God wants us to go to succeed as a country, to become a superpower Nigeria, and for the rest of the world to understand that God did not create the black man inferior in any way. Nigeria. It is our task to make the world understand that and earn the respect of all blacks.

If you want me to, I will organise for all those people you doubt to come out and tell you that they support Obi. We know where we are, and we just don’t want it to be a project of the Igbo because it is for the good of all Nigeria. He is a unifier.

Recently, the political temperature of the eastern axis went aflame when you paid a visit to Kashim Shettima. Although, you issued a statement to clarify the purpose of the visit and also hit up Tinubu, what is the update about the young man whose business was in ruins that you introduced to Shettima?

I’m very disappointed. The young man believed so much that if I followed him to Shettima, Shettima would influence the serving governor (Babagana Zulum) to do things for him. When we got there, I was so well received and very well respected by Shettima, and for the reason for our coming, he agreed completely to help the young man.

So far, maybe because he is busy with politics, the promises have not materialised. I think it is not two months yet, and I believe Shettima will do what he promised. And may God give me the energy; any other person that comes with a problem, to whoever it is, I would have to go and beg; I will go. If you want me to beg Buhari, I will. I have gone to Buhari for Kanu.

I can do anything for anybody and beg for anybody. And it doesn’t have to be Igbo. I just realised that God wants me to serve Nigeria, and I am serving Nigeria.

You have been an apostle of restructuring but it appears that the North is against restructuring. What is the way forward?

No, the North cannot be against restructuring. The North is against resource control.

We want to have all those clamouring for Biafra, Oduduwa Republic, and others in Nigeria. How do we achieve this? This is by giving fair independence to regional governments. If you have been doing something and it is working, eventually you will start another that is not working; the best thing to do then is to go back to what was working. This means going back to regional government, where members of the region are in control.

How will you describe what is going on between the government and the leader of the Indigenous People of Biafra, Nnamdi Kanu, based on the court’s judgments?

What I will say about that is that the Federal Government should restore prestige to our court and justices. The federal government has been using its power to discredit our courts and judges. How many people now believe in whatever the court says? I don’t want to comment on specific cases. Thank you.

What can you say about the Afenifere faction led by Pa Reuben Fasoranti adopting Asiwaju Bola Tinubu, who is from the South West? Is your adoption of Peter Obi a kind of response to what Afenifere did?

No, no, no. First of all, Afenifere had endorsed Obi. By the way, this is payback time. No Yoruba man, alive or dead, worked harder for Abiola than I did. Let the Yorubas’ think.

It is the failure of the Yoruba and the Igbo to agree among themselves that is causing the poverty and insecurity we face today. It is because the Igbo and Yoruba have refused to work together. – Culled from Punch.

2023: Nothing wrong if another northerner succeeds Buhari – Prof Ango Abdullahi

TheCitizen NG is a leading Online Newspaper and Magazine website. We bring you the very latest news and information from Nigeria and around the world. Follow us today to stay tuned!