PDP moves to recall Dogara from House of Reps

The Peoples Democratic Party(PDP) in Bauchi State is planning to recall former speaker Yakubu Dogara from the House of Representatives.

Dogara last week dumped the PDP, for the second time and returned to the All Progressives Congress (APC).

The move angered the PDP hierarchy both in Bauchi and at the national level.

Now a chieftain of the party in Bauchi has revealed the next move against Dogara, who is representing Bogoro/Dass/Tafawa Balewa constituency.

Malam Bibi Dogo, disclosed that stakeholders from the party will soon ask the leadership of the House of Representatives to declare Dogara’s constituency seat vacant.

The PDP chieftain said that the people of Bogoro, Dass and Tafawa Balewa federal constituency who elected Dogara on the platform of PDP were no longer comfortable with being “totally eclipsed” in the House.

“The constituents do not know any convincing reason why their elected representative in the National Assembly defected to APC as Dogara did not consult them before his defection.

“I hereby call on the House of Representatives leadership to quickly declare Dogara’s seat vacant to enable the constituents elect a capable replacement.”

He explained that in view of Dogara’s inability to consult his constituents before defecting to APC, the constituents would soon commence the process for Dogara’s recall, declaring that the people will not condone political indiscipline.

Dogo submitted that the reasons stated by Dogara in the resignation letter he sent to his PDP ward chairman are nothing but flimsy excuses.

Dogo claimed Dogara has lost his political relevance, and his return to APC will spell doom and help in the final burial of APC not only in Bauchi State but Nigeria in general.

Dogo noted that Dogara had made three defections in recent times.

“His jumping from party to party smacks of political indiscipline but you know that a rolling stone gathers no moss. Unfortunately, he lacks the political discipline to be trusted with any public office in Bogoro, Dass and Tafawa Balewa.

“How can you trust a man whose only political antecedent is jumping from one party to another? The PDP will soon take a drastic action to ensure Dogara is recalled”, he said.

Recalling an elected member is a complicated process.

It starts with a petition to INEC signed by more than 50 percent of registered voters in the constituency.

INEC will notify the elected person being recalled and then move to verify the signatures on the petition.

If verification succeeds, INEC will hold a referendum to determine whether the recall should proceed.

There has been no single case of a successful recall since 1999. – Daily Trust. 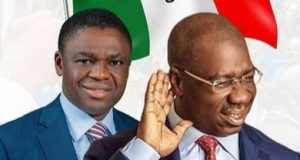 Tinubu, Oshiomhole under fire after APC loss in Edo

Some section of Twitter users on Sunday trolled the National Leader of the All Progressives Congress (APC), Chief Bola Tinubu, and the sacked Chairman of the party, Adams Oshiomhole, following the declaration of Governor Godwin