Shorunmu was Babalade’s teammate at the 1992 Africa Cup of Nations in Senegal.

Babalade, 48, died while being rushed to the University College Hospital, Ibadan.

He is survived by a wife and three kids, who are all based in the US.

Shorunmu disclosed that the former Shooting Stars Team Manager was denied treatment by the first hospital he was taken to, before he was referred to UCH.

“The first hospital he was rushed to in Ibadan, he was rejected by the doctors and referred to the University College Hospital. But on his arrival at the UCH premises, he gave up the ghost at the gate. May his soul rest in peace,” Shorunmu disclosed.

Shorunmu said he was informed of Babalade’s death in the afternoon, after attending Jumat service.

“I went to the mosque for Jumat service this (Friday) afternoon, so I switched off my phone. Immediately I put it back on, I got a message from Ajibade’s in-law that I needed to be at his place. So, I went with my wife, but on our arrival, the (Babalade’s) family broke the news to me,” Shorumnu stated.

“I’m very sad as we speak now. This is someone whom I spoke with two days ago (on Wednesday), when he celebrated his son’s birthday.

“I was told he had cardiac arrest in the (Friday) morning. I had to console his wife and kids, who are based in America, over the demise of their father. He died at the UCH gate.”

The hard-as-nails retired defender was a squad member of the Eagles that won bronze at the 1992 Africa Cup of Nations in Senegal. He was capped 13 times by Nigeria between 1990 and 1998.

Babalade began his professional club career at Stationery Stores of Lagos in 1990, before several stints at 3SC, helping the Oluyole Warriors reach the final of the CAF Champions League in 1996. 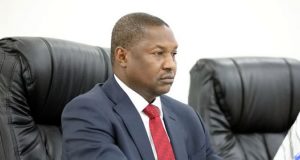 The Lagos State Government on Friday said it had approved the construction of 250 roads and 23 power projects in various parts of the state.