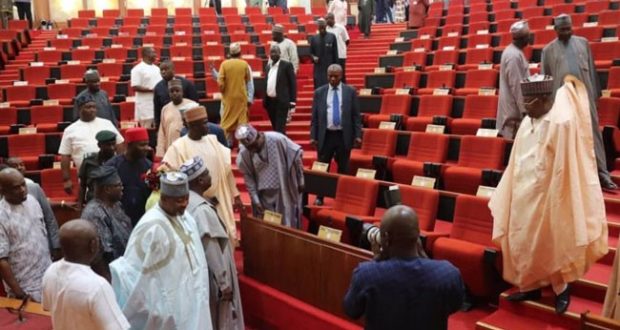 The Senate on Thursday approved the $22.79bn loan request of President Muhammadu Buhari.

The process of approval, was not however, without protests from the opposition senators led by the Minority Leader,  Enyinnaya Abaribe.

The Chairman, Senate Committee on Local and Foreign Loans, Senator Clifford Ordia, laid the report and was about to read the executive summary when trouble started.

Senator Adamu Aliero asked the President of the Senate, Ahmad Lawan, to postpone deliberation on the document until next week to enable them study the report very well.

Lawan rejected the suggestion warning that the report may have become a public debate before next week because the press would definitely get copies and publish the contents.

The coast was then clear for Ordia to present the executive summary of his report but his conclusion generated another heated argument among senators.

The senators faulted the two-item recommendation proposed by the Ordia-led panel without furnishing them with details of the projects, the beneficiaries and the amount allocated to each of them.

Lawan, however, disagreed with them, stressing that by the Senate rules, the report should not be subjected to line by line consideration.

He said, “We are not doing second reading on this. We have recommendations which we will vote on but before we reach that stage, what is here is what is to finance our capital budget.

“It is important we are conscious that we need the capital aspect of the budget funding.”

But Abaribe faulted the position of the Senate President.

He said, “The position is that we would now approve some of this. It is when we get to the point of looking at each one of them that we will now determine which of these projects will help in growing our economy. Now that you have said we will take it line by line.”

But Lawan said, “Let me make this point very clear. This is a request and what I said is, this is to fund our capital budget. It means the capital budget is weighty.

“Until we pass it, there will be no implementation of the capital budget. So it is a choice.

“If we want, we pass, if don’t want, we don’t pass. We are going to make it tight spending this money.”

Not done with the issue, Abaribe said, “I just want to end with a very apt saying which I think the whole world knows, ‘who goes aborrowing, goes asorrowing’.

“We are going to pass a loan approval of $22.7bn and we, who are going to pay back that are making efforts to make sure this is clarified and Mr. President, you are not giving us the privilege to make our points known and come across. We don’t see anything that is so difficult for us.”

The situation became tensed afterwards and the Senate Leader, Yahaya Abdullahi,  saved the day by calling for a closed session, a suggestion earlier made by Senator Gabriel Suswan but overruled by Lawan.

The Senators, however, approved the loan request when they emerged from the 45-minute closed session.

The funding agencies, according to the Senate panel are:

Some of the projects to be funded with the loans include the Nigeria Electricity Transmission and Access Project ($364,000,000) and Social Inclusion and Welfare Advancement project, renamed National Social Safety Net Project, ($500,000).