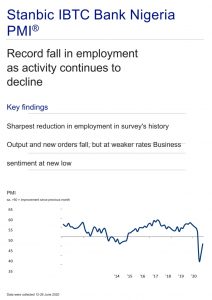 The Nigerian private sector has remained in decline at the end of the second quarter of the year, with the coronavirus disease 2019 (COVID-19) and associated restrictions to prevent its spread continuing to impact operations.

That said, a loosening of the lockdown led to softer declines in output and new orders. On the other hand, difficulties in paying staff led to a record fall in employment, while business confidence was the lowest in the survey so far.

Firms also had to contend with a substantial increase in purchase costs, which resulted in a near-record rise in selling prices.

The headline figure derived from the survey is the Purchasing Managers’ Index™ (PMI®), a property of Stanbic IBTC Bank PLC.

Readings above 50.0 signal an improvement in business conditions on the previous month, while readings below 50.0 show a deterioration.

The headline PMI rose to 46.4 in June, up from 40.7 in May to signal a softer deterioration in business conditions in the private sector.

Both output and new orders continued to fall, albeit at reduced rates. Restrictions to prevent the spread of COVID-19, a lack of customers and insufficient funds to commit to new orders were all mentioned by respondents.

Difficulties in paying staff led to a third successive fall in employment.

Moreover, the rate of job cuts was the fastest since the survey began in January 2014.

A combination of pay cuts and job losses resulted in a decline in staff costs, also the sharpest on record.

In contrast to falling staff costs, purchase prices continued to increase substantially, with the rate of inflation hitting a new record for the third month running.

Raw material shortages and currency weakness were reportedly behind the latest rise in purchase prices.

The strong increase in purchase costs fed through to a steep rise in selling prices, with the rate of inflation little- changed from the record posted in May.

The prospect of further price rises led some firms to purchase inputs in June to guard against this. Both input buying and stocks of purchases decreased only marginally.

Meanwhile, suppliers’ delivery times shortened to the greatest extent in three months amid competitive pressures and a lack of capacity pressure at vendors.

The impact of COVID-19 led to a marked drop in confidence regarding the 12-month outlook for business activity. In fact, sentiment was the lowest in the survey’s six-and-a-half year history.

The Stanbic IBTC Bank Nigeria PMI is compiled by IHS Markit from responses to questionnaires sent to purchasing managers in a panel of around 400 private sector companies.

The panel is stratified by detailed sector and company workforce size, based on contributions to GDP.

The sectors covered by the survey include agriculture, mining, manufacturing, construction, wholesale, retail and services.
Survey responses are collected in the second half of each month and indicate the direction of change compared to the previous month.

A diffusion index is calculated for each survey variable.

The indices vary between 0 and 100, with a reading above 50 indicating an overall increase compared to the previous month, and below 50 an overall decrease.

The indices are then seasonally adjusted.
The headline figure is the Purchasing Managers’ Index™ (PMI).

For the PMI calculation the Suppliers’ Delivery Times Index is inverted so that it moves in a comparable direction to the other indices.

Underlying survey data are not revised after publication, but seasonal adjustment factors may be revised from time
to time as appropriate which will affect the seasonally adjusted data series. 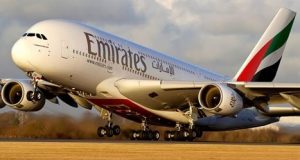 To mark the 2021 ‘World Blood Donor Day-themed “Give blood and keep the world-beating,” staff of Wema ...